Announcing the inaugural winners of the Matthew Dickinson Memorial Trophy, presented to the fencers finishing at #1 in the GBR Cadet and Junior Rankings at the end of the season.

The trophies were donated in memory of Matthew Dickinson, a member of the Cadet and Junior GBR fencing team from 2014 to 2018, during which time he became the youngest winner of the U23 National Championships and represented GBR at European and World Championships level. Matt passed away on Sunday 26th April 2020 aged 20. 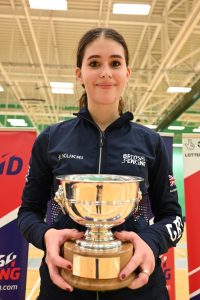 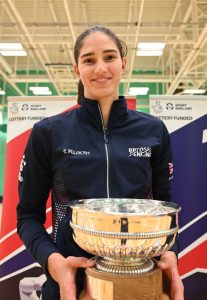 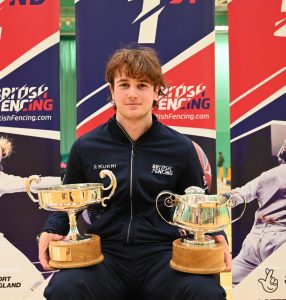 On being presented with the trophy, Julia Caron said “Today I finished 2nd at the Junior British Championships but my biggest honour was to receive the Matthew Dickinson trophy for my overall #1 ranking this season.

Hannah Lebor added, “I am very grateful to be awarded the first Matthew Dickinson Memorial Trophy. It is an honour to accept this beautiful award.”

Alec Brooke commented, “The trophies are a wonderful memorial and will inspire young fencers for years to come, as they will inspire me to keep working on and enjoying fencing”

The athletes all sent personal messages of thanks to Matt’s family.

The trophies were presented by Georgina Usher, CEO and Steve Kemp, Pathways Director, at the 2022 Cadet and Junior National Championships.