BF is a very small National Governing Body. A significant number of the team work part time (although you will find many of them volunteering at our major events at the weekends). If you want to contact us with a query we recommend using the forms on our Contact Us page. This means

(for queries relating to invoicing and payments please email finance@britishfencing.com) 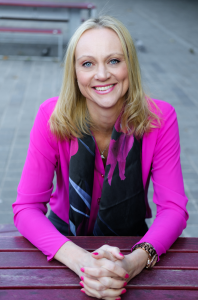 Since joining British Fencing in April 2014, Georgina Usher has successfully implemented a new insight-led strategic approach to increasing participation in fencing and has restructured the organisation to improve delivery of this strategy.

Before this, Georgina was the Operational Director CIO Connect, an independent advisory and consulting organisation dedicated solely to the CIO, their leadership teams and their agenda. As part of this, she oversaw a successful initiative to increase membership retention through customer focussed initiatives, whilst re-structuring the cost-base to deliver financial sustainability.

Prior to CIO Connect, Georgina worked as a project manager, strategist and business consultant for companies including Legal & General and Accenture.

Georgina had a successful fencing career, representing GB at many European and World Championships and spending several seasons ranked in the World Top 16. She holds 10 individual Senior National Championship titles, and has won several Commonwealth medals (including Gold in 2014). She currently competes on the 40+ circuit where she is two-times European Champion.

Georgina is also President of the FIE Women in Fencing Council and a Board Director of the British Olympic Association. David has over 16 years experience in finance, working in practice, industry and sport.

He began his career in practice, gaining experience in accounts preparation, audit and taxation whilst working through his professional exams to qualify with the ACCA in December 2004.

Having qualified and gained experience across a range of areas, he later took time out to travel around Australasia and South East Asia.

Upon returning to the UK, he decided not to return to practice and began gaining experience in a number of industries.  This included working for the oilfield services company Schlumberger where he was responsible for reporting the finances of a subsidiary with a turnover in excess of £500 million.

David first came to work with BF in October 2012 and has been working with us ever since.