Fihosy went on to beat Beardmore to make the final where she was joined by Dickson who defeated teammate Smith.  Dickson took the title by beating Fihosy 15-8. 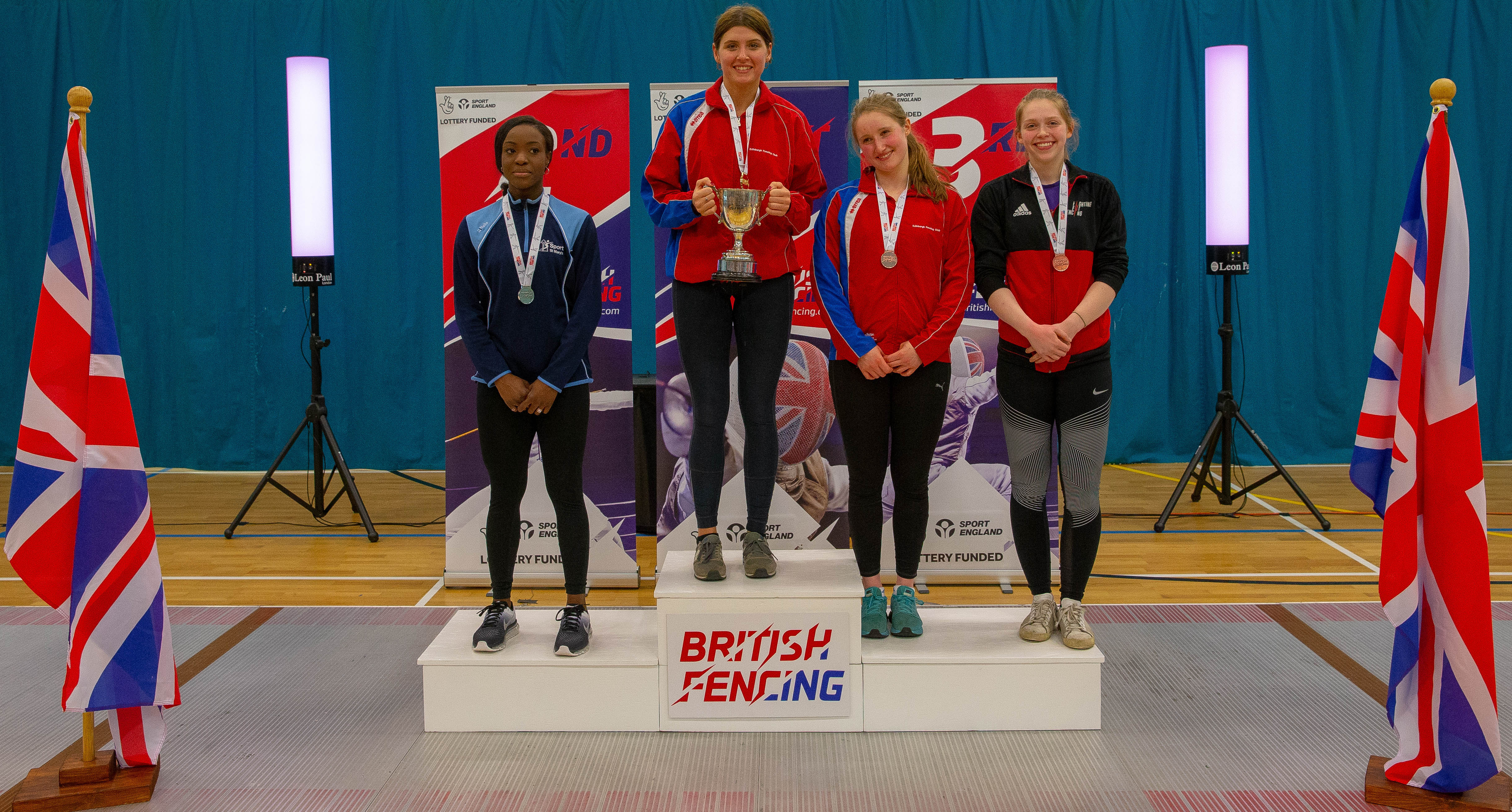 Ninety-eight fencers took part in this event and Harrison Nichols (Redhill & Reigate) emerged from the poules stage as top seed followed by Nick Perry (Haverstock), Philip Marsh (Bath Sword) and William Grealey (Redhill & Reigate).  Marsh was eliminated in the round of 32 by Elliott Grover (Leon Paul Epee) along with Perry who lost to Christopher Hay (unattached).  Nichols fell to Aml Sinclair (Leon Paul Epee) in the round of 16 but Sinclair went on to lose to James Russell (Redhill & Reigate) for a place in the semi-finals.  Grealey came undone in the round of 8 to Calum Johnston (Edinburgh).  Grover capitalised on his victory over Marsh to make the semi-finals.  Hay fell in the 16 to Calum Maynard (Egham Fencing Club) who then beat Daniel McGlade (Leon Paul Epee) to secure his place in the top four.

Johnston beat Russell in a tight semi-final as Maynard eased past Grover.  Johnston made it two titles from two events for Edinburgh as he beat Maynard in the final. 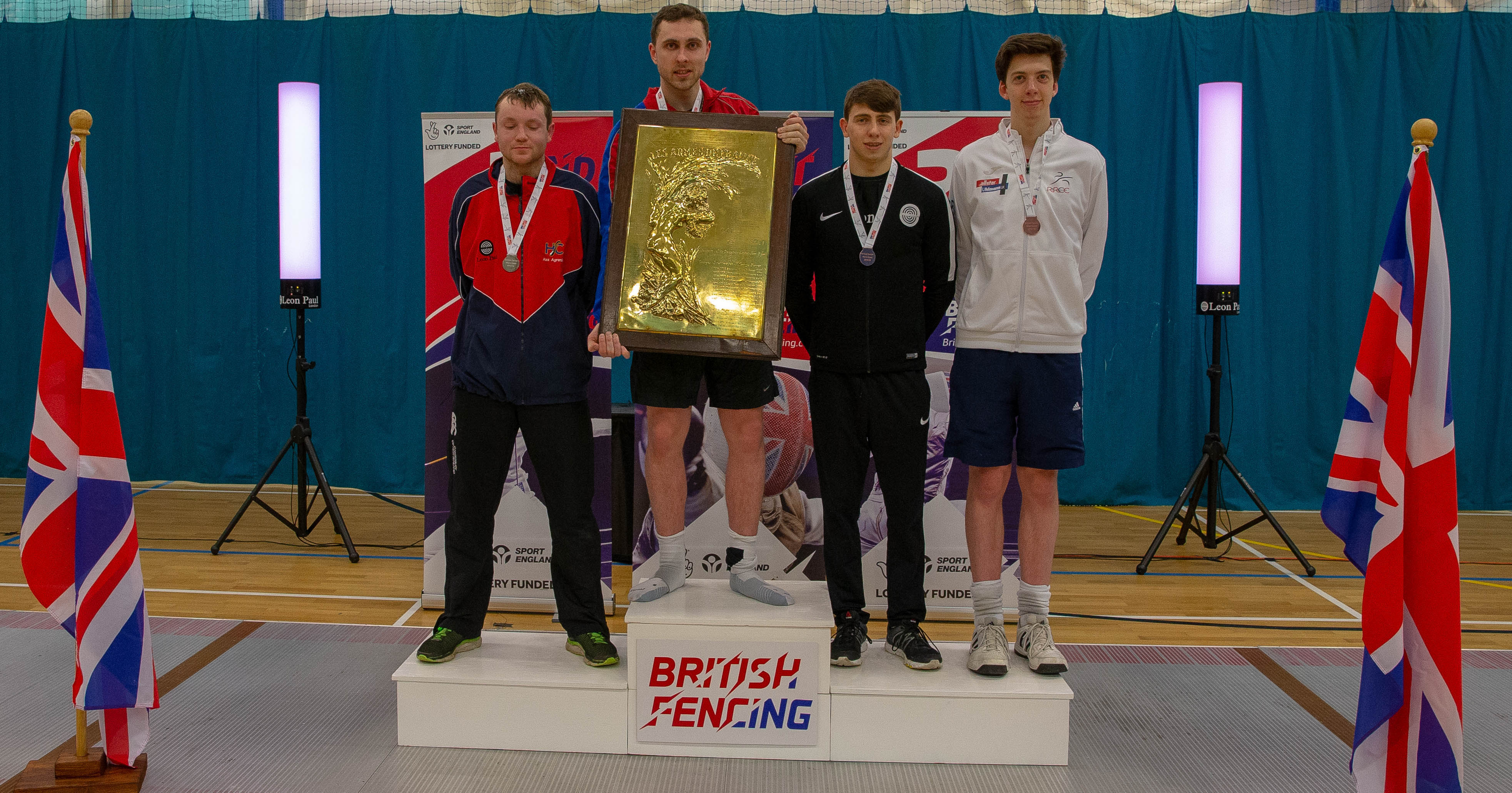 Fifty-two fencers took part in the third and final event of the opening day of the tournament.  James Honeybone (Truro) came through the first round as top seed, followed by teammate Will Deary, Curtis Miller (Camden) and Zachary Hamilton (Shakespeares Swords).  All four progressed through to the semi-finals where Honeybone beat Hamilton and Miller defeated Deary.

Honeybone claimed another national title by beating Miller in the final.

Watch the day one finals here. 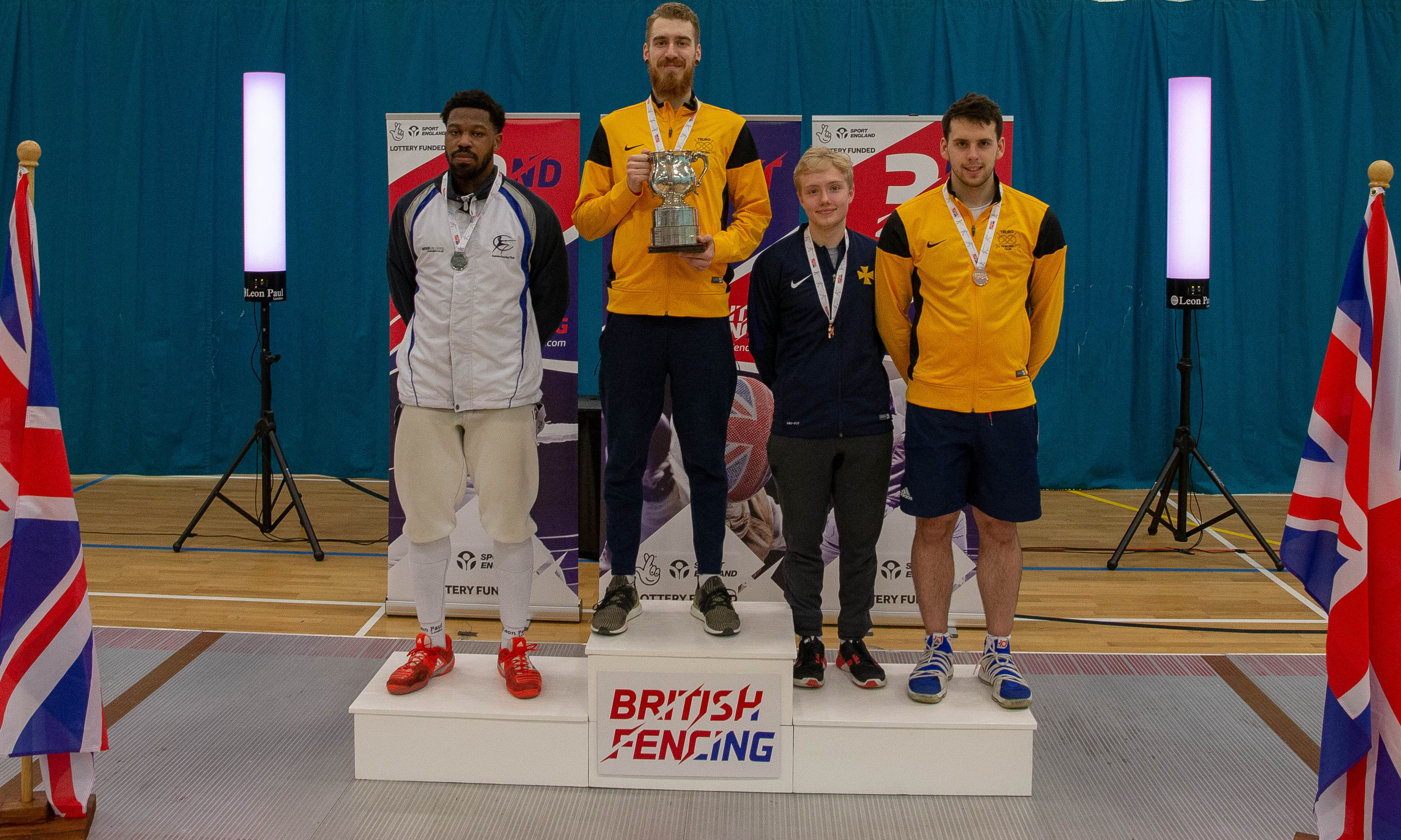 There were sixty-five entries in this event and Lydia Stanier (University of Surrey) came through the poule stage as top seed, followed by Stella Lancey (Cardiff), Emily Southern (Brixton) and Caitlin Philbin (Wallace Fencing Academy).  Philbin fell to Mary Cohen (Unattached) in the round of 32 and Cohen went on to make the semi-final.  Southern lost in the same stage to Georgia Hannam (Bath Sword) but Hannam then lost to Madeliene Lee (Plymouth) who progressed to the top four.  Lancey was eliminated by Rose Grimshaw (Leon Paul Epee) in the round of 32 but Grimshaw then lost to Rachel Barnes (Much Wenlock).  Barnes was defeated by Danielle Lawson (Malvern Hills) in the round of 16 and Lawson pushed on to make the semi-final.  Stanier made it all the way through the 16 before losing to Julie Henson (Affondo) who went on to compete for the medals.

Henson was undone by Cohen in the first semi-final as Lawson defeated Lee.  Cohen went on to take the national title beating Lawson in the final. 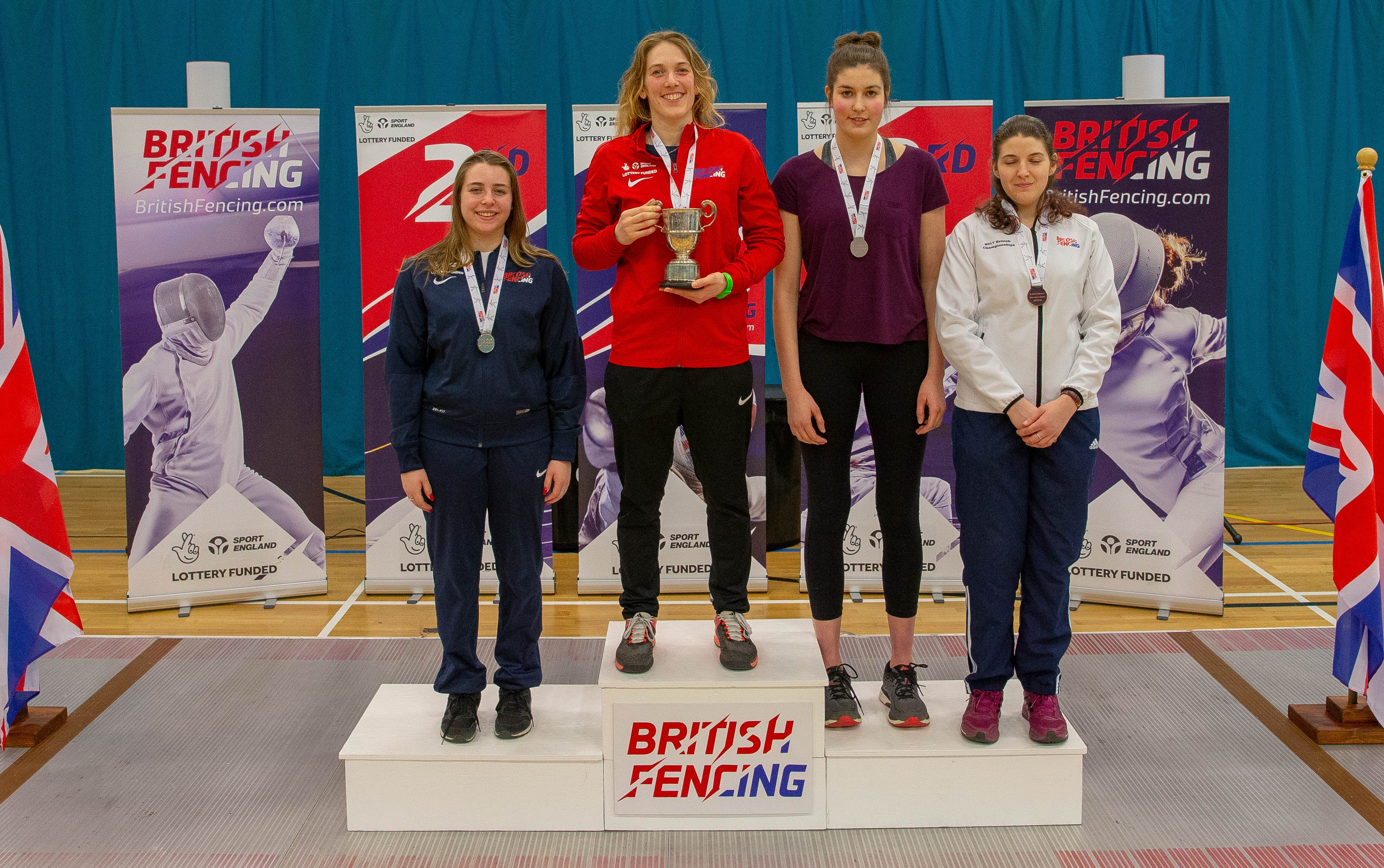 There were ninety-five fencers in this event and after the poule stage Peter Barwell (ZFW) shared the top ranking with teammate Richard Kruse, followed by Harry Bird (Salle Boston) and Kamal Minott (Newham Swords) who also shared the same ranking.  Kruse came through his quarter to make the semi-finals and faced Minott in the semi-finals who also progressed to the top four.  Bird lost to Keith Cook (Salle Holyrood) in the 16 and the Scottish fencer made it through to the medal matches.  Barwell also went out in the 16 to teammate Cameron Evans but Evans lost to Matthew Billing (Salle Boston) who went on to fight for the medals.

Kruse eased past Minott in the first semi-final as Cook defeated Billing.  Kruse picked up another British title edging Cook in the final. 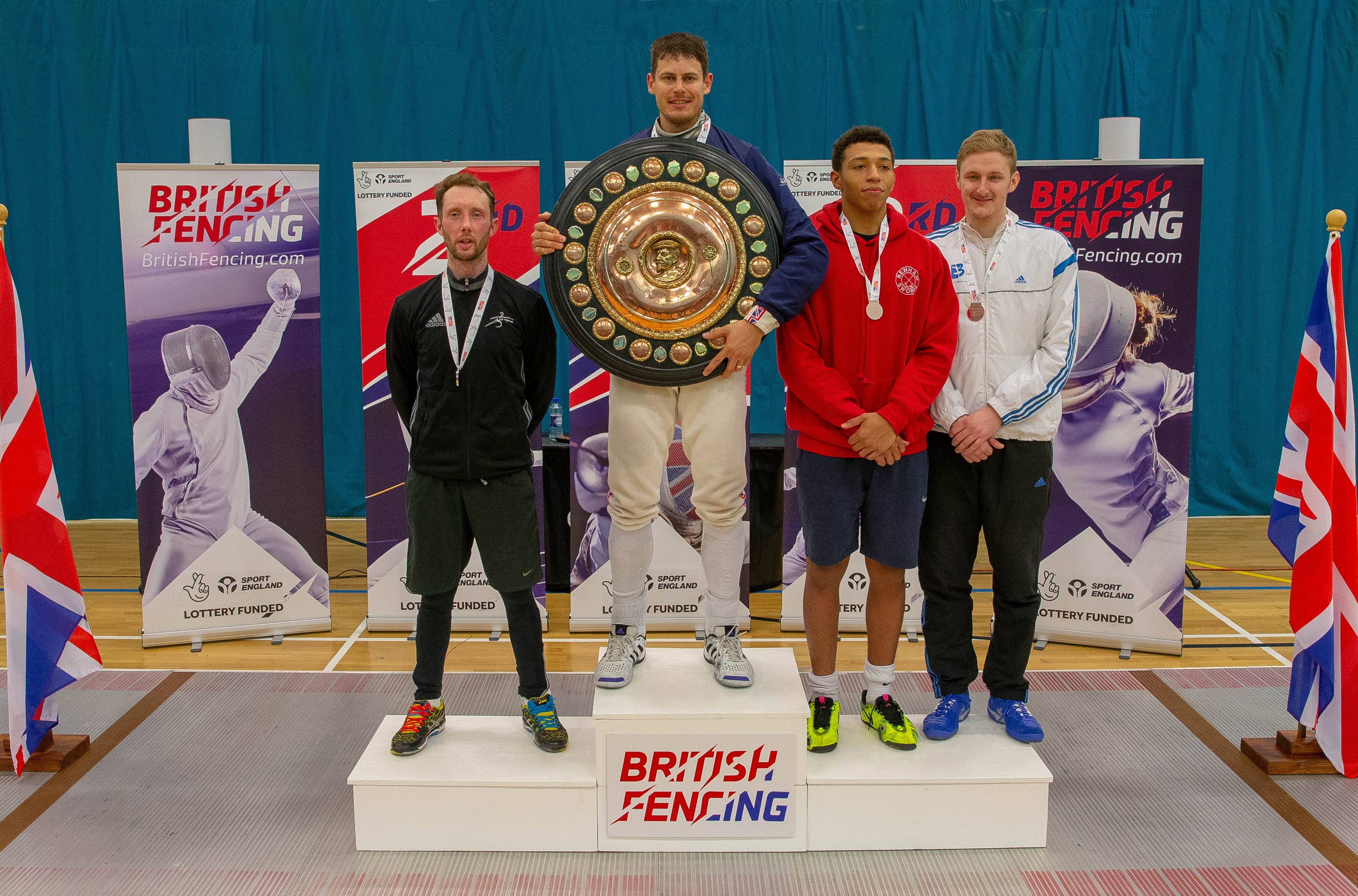 Forty fencers took part in the last event of the Championships and Aliya Itzkowitz (Camden) emerged from the first round as top seed, followed by Sarah-Jane Hampson (Salle Ossian), Caitlin Maxwell (Truro) and Bridget Pleasant (Camden).  All four progressed through to the semi-finals where Itkowitz beat Pleasant and Maxwell defeated Hampson.  Maxwell went on to claim another British title beating Itzowitz in the final. 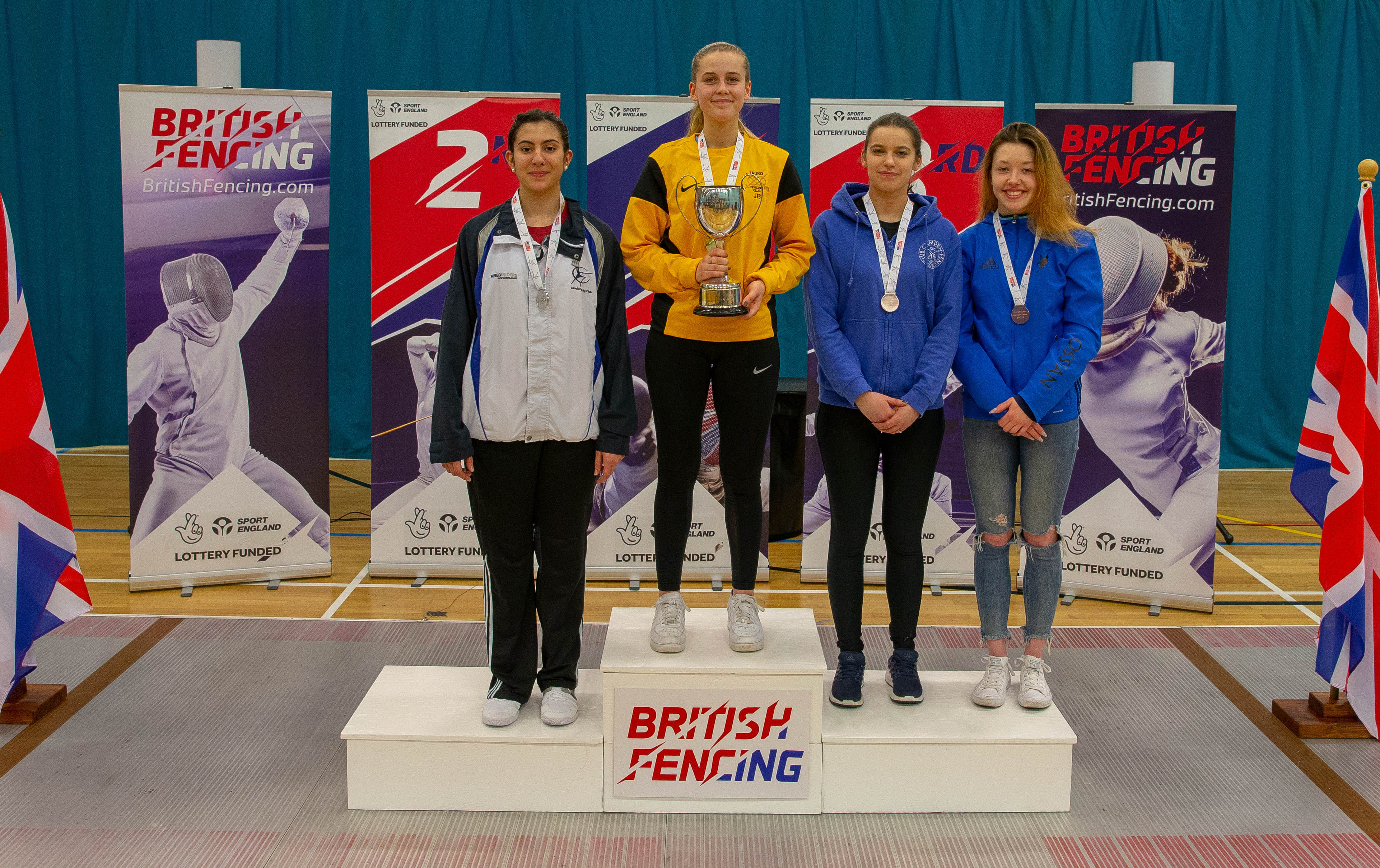