BRONZE IN BRAZIL FOR COLLIS

Gemma Collis continued a strong start to the Paris 2024 Paralympic cycle with Category A Epee Bronze & 5th in the Sabre at the Sao Paulo Wheelchair Fencing World Cup in Brazil, adding to her two medal haul at the Pisa World Cup in November.

Day One – Women’s Category A Epee:

Having torn her hamstring just over nine weeks ago, Collis went into the event uncertain of what to expect – but soon found her stride in the Epee on day one. She won four out of her five poule fights, losing only to left-hander Hyo Kyeong Kwon of South Korea after breaking the leg strap on her chair at 4-2 up.

That left Collis seeded third going into the direct elimination, giving her a bye through to the last 16. She swept aside Suthin Sita of Thailand 15-2 to progress to the quarter-finals where she met Georgia’s Nino Tibilashvili in a rematch of the semi-final at the last World Cup in Pisa, which Gemma narrowly won 10-9.

There were no doubts over the winner this time though – Gemma opened up a six-point lead early on and never looked back, scoring a series of wrist hits and remises on her way to a commanding 15-9 victory.

With a medal secured, Gemma took on former able-bodied Spanish international Judith Rodriguez Menendez in the semi-final. Having beaten her earlier in the day in the poule, Collis struggled to adapt to the Spaniard’s change of tactics getting caught on the counter several times. Without a coach at the event, she was forced to think on her feet during the break but found herself too far adrift to make up the difference in the second period despite some initial success – losing 15-9 to Rodruguez Menendez who went on to claim her maiden World Cup victory.

On her medal, Collis said: “I was a little disappointed not to make the final this time round, but given the preparation we had I couldn’t be more proud to have medalled at successive World Cups for the first time in my career. I feel really confident that we’re moving in the right direction, and hopefully this is just the start of a really successful cycle for me and my incredible team.” 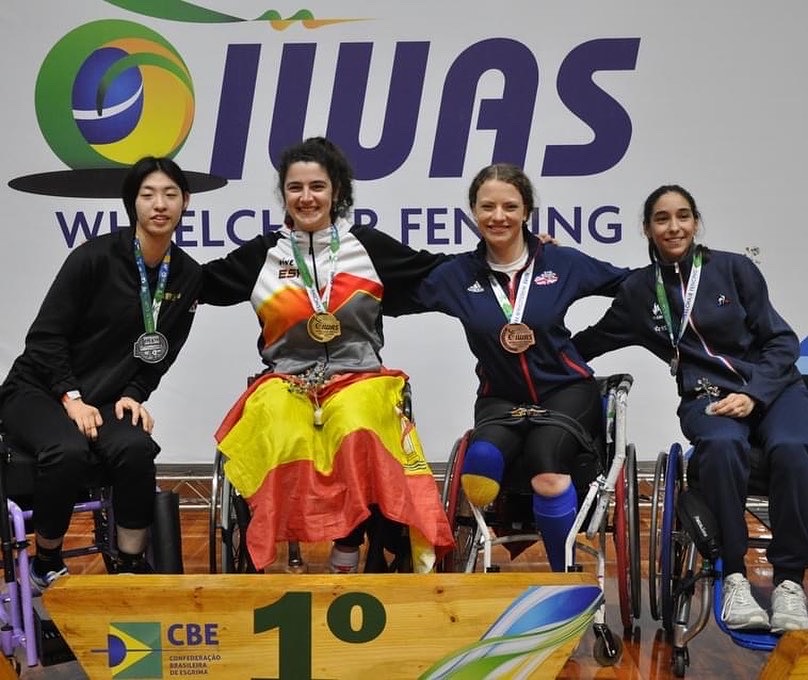 With one medal in the bag already, Gemma went into Sabre day with high hopes of securing another after making an electric start in the poules – winning all five of her fights, conceding just four hits along the way.

Her first-ever clean sweep in the Sabre poule stages left Collis seeded 2nd going into the knockout phases, giving her a bye once again through the last sixteen.

Collis took on Brazil’s Fabiana Soares in front of a partisan crowd first, securing a 15-9 victory thanks to a series of long compound attacks.

Next up, she faced South Korean left-hander Hyo Kyeong Kwon in the last eight. Buoyed by medals in both the Epee and Foil already, Kwon proved tough opposition – gaining an early lead and never looking back.

Collis lost 15-8, leaving her 5th in the final standings in the Sabre – but with plenty to take confidence from for this cycle, having only begun training seriously in Sabre after giving up Foil at the start of the coronavirus pandemic.

On another promising Sabre performance, Collis said: “Although I’m disappointed not to have converted such a solid poule performance into a medal, I am absolutely buzzing to see the work we’ve been putting in paying off under pressure. I definitely fenced the best I ever have in the poule, which is really exciting – now it’s just about working to ensure I can maintain that level throughout the day and into the latter stages consistently.”

On returning from injury, she added: “Having torn my hamstring just nine weeks ago, I feel really grateful to my team for the work they all put in to get me in a position to be so competitive in Brazil. My coaches Baldip and Jon managed to adapt my training to ensure we could continue making progress, even when I couldn’t lunge. Whilst my physios Maria, Toby and David, and S&C coach Steve all made sure I was feeling strong and powerful again in time for the competition. A huge thanks has to go to all of them, as well as my family for their support as always!”