As the first GBR fencing team to draw Russia since the crisis began, the Junior (U20) Women’s Epee Team withdrew from the European Championships as a mark of respect and solidarity to the Ukrainian Fencing Family.

The Great Britain Junior (U20) Squad travelled to Novi Sad, Serbia last week to compete in the European Championships as the conflict began. 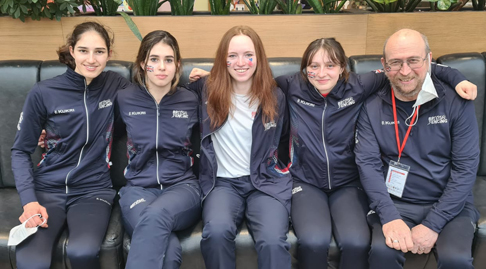 After an emergency Board meeting on February 28th, British Fencing (BF) issued a statement condemning the invasion of Ukraine and stating that GBR fencing athletes would not fence Russian or Belarusian fencers either as an individual or as a team until further notice.

This decision came the evening before the GBR squad were to take to the piste the following morning in the Team Events with the strong possibility that the Women’s Epee Team would be the first GBR team to meet Russia.

The Board’s decision was communicated to the epeeists in a conversation with the Team Managers, coaches and parents. The athletes were then involved in the discussions and made a team decision as to how to approach the situation, which included assessing the risk of receiving a black card and a ban for refusing to fence, potentially affecting the upcoming World Championships.

Demonstrating BF’s values of respect, honesty and excellence, the Junior Women Epeeists chose to fence to the best of their ability against Austria before standing down in a respectful and non-confrontational way from their match with Russia, even though that put an end to GBR’s ambitions within the team competition. Their behaviour and withdrawal proved to be a model for other nations, with Italy following suit, stepping away from their draw with Russia in the next round (the Last 8). Following the subsequent withdrawal of a number of Nations, Russia withdrew their teams from that competition and all the remaining Junior Team Events. Thus the Championships was able to then proceed under IOC recommendations, unfortunately too late for those teams that had withdrawn including the GBR Women’s Epee Team.

BF’s Chief Executive Georgina Usher was quick to acknowledge the importance of the actions of the epeeists, Imogen Bulman, Julia Caron, Hannah Lebor and Rachael Lever. In a letter to the athletes she said, “Representing your country is about so much more than performance and results. Today’s events have demonstrated the courage needed by athletes to stand up and be counted in the wider context of the world that we live in”.

Usher also gave due recognition to how the epeeists had already missed out so much in terms of fencing and competing because of the pandemic, and for some (due to their age) this would be their last major junior Championships. “You have put this aside to show your support and respect for the Ukrainian people and importantly the Ukrainian fencing family”.

Usher continued, “Do not underestimate what you have achieved today. Your actions have led the way for others to make the decisions to show similar support which has ultimately led to the implementation of the IOC recommendations for the competition. This now means other athletes (both from GBR and other nations) will now be able to fence in the remaining Junior Team matches and events and that, in part, is because of you. I believe that in future you will be able to look back on your actions with pride and a clear conscience”

Steve Kemp, Head of Pathways added “The BF community has come together to voice their appreciation and admiration for these young athletes. They demonstrated the ability to make difficult decisions as a team under pressure in unprecedented circumstances.  They put others before themselves, whilst exhibiting maturity and demonstrating BF’s values of honesty, respect and excellence, to their own credit and to that of their country”