David Sosnov (ZFW) – fresh from his double victory at the National Junior and Cadet Championships last weekend – won the competition after an impressive day’s fencing.

He won 5 from 6 in his poule incurring a single 5-4 defeat to Levadnii (UKR) and was seeded 17th in the DE.

His coach Ziemek Wojciechowski commented “Wiltold Woyda was my inspiration when I was a young fencer as I admired immensely his intelligence on the piste. Today David Sosnov matched this rare quality. Today wasn’t just about winning . It was about having great relationships, teamwork and true passion.” 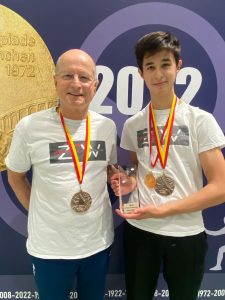 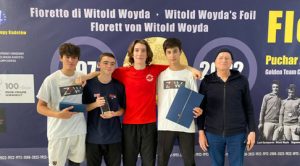 Congratulations  to all coaches and athletes on these inspirational results.

The team are on BF’s Athlete Development Programme (ADP), funded by UK Sport and Sport England. The ADP is a six weapon programme that exists to support athletes in achieving Olympic success and inspiring others. It covers athletes from age 15 to 35 (and beyond for those performing at Olympic and Paralympic level) who are moving through a defined development pathway to success at the highest level of fencing. The ADP is founded on the strategic principles of being fencer-centred, development-driven, competition-supported.

You can find out more about the ADP here.