The World Class Programmes (WCP) have returned to training for the new Olympic cycle and for the 2016/2017 season.  Whilst the Olympic Games in Rio did not deliver the medal we had all worked so hard for, we have taken the positives from the performances and are now looking forward to how we need to evolve the Programmes to deliver in Tokyo.  We are confident that the overall WCP we have put in place which is continually evolving and improving, is moving in the right direction to ensure that the wait for a World and Olympic medal will not be far away!

Over the last nine months we have put together our strategy and business plan for the next Olympic cycle.  Prior to Rio we submitted our draft plan and budget to UK Sport which was accepted in principle.  We are now refining our submission and this will go to UK Sport in early October.  We will get a funding decision in December, but based on the feedback to date we are confident that the plan and budget submitted to support our Tokyo ambitions will be supported.

In advance of the funding decision we have already begun to implement our plans for the next Olympiad.  With no men’s foil team in Tokyo, the focus is qualify individual athletes in this weapon with the potential to win a medal, alongside the qualification of a men’s sabre team.

Three senior men’s foil athletes (James Davis, Richard Kruse and Marcus Mepstead) who attended the Rio Olympics are all having an extended break and will return to training during the autumn / winter period. Laurence Halsted decided to retire following the Olympics and has therefore left the WCP.  We wish Laurence every success for the future.

We have identified three athletes who have moved from junior to senior level, to join the men’s foil podium potential programme.  In addition, a number of athletes have been identified to be part of the under-pinning men’s foil talent programme (Performance Foundations).  We are currently confirming with each of the selected athletes that they wish to join the programme and a list athletes will be confirmed within the next few weeks.

The Men’s Sabre Programme returned back to training at the Elite Training Centre (ETC) on 5th September 2016 following a short break over the summer.  We were delighted with the men’s sabre progress over the last season, demonstrated by an exceptional team performance at the European Championships and finishing the season ranked 14th in the world rankings.

The focus is to now to further develop the sabre squad and build the pathway of athletes below.  Pierre Guichot will continue to lead this programme and will be supported by Cyril Tahon.   We are delighted that a coach of Cyril’s calibre has decided to join our Programme as a WCP Sabre Coach.  He will work alongside Pierre to work with the senior squad, whilst at the same time being responsible for the development of the talent pathway in men’s sabre.

We currently have six athletes identified in men’s sabre at podium potential level:

As a public funded programme with responsibility to UK Sport for our strategy, progress and results, athletes have a choice to join our Programme as we are operating it or to remove themselves from it and pursue a route they feel best suits them.  Unfortunately, James Honeybone has decided that he no longer wants to be part of the WCP but wishes to follow his own training and competition programme based in Hungary.  We wish James well with his fencing.

Following the departure of James Taylor, we took the opportunity with Sport England, to undertake a review of the Talent Programmes following this years Junior World Championships and the publication of their new strategy.

We presented the results of the review and proposed changes to the British Fencing Board in July which the Board accepted.  This is the basis for the discussions with Sport England for the funding submission for the next cycle.  Whilst the discussions and submission are on-going, we have made the decision to move to the new structure with immediate effect.

Performance Foundations – This level will sit immediately below podium potential. PF will initially only operate in three weapons : men’s foil, men’s sabre and women’s foil.  There will be a dedicated coach for the two weapons at this level.  Maciej Wojtkowiak will continue in men and women’s foil and Cyril Tahon will take on the responsibility for men’s sabre.  Both coaches will work alongside the two national coaches in men’s foil and sabre to ensure a seamless transition through the pathway particularly the link between performance foundations and podium potential.

Talent Identification and Confirmation – This will become a ‘testing’ and ‘confirmation’ phase for those athletes who have been identified as being good enough at a local level to join a national programme.  An athlete will be identified to join, for a time limit of six months, the performance foundations training with the WCP Coach, to determine whether they should join this programme on a permanent basis.

Talent Development Centres – We are committed to developing a six weapon pathway at a more local level.  The expectation is that we will have TDCs in all six weapons.  We are currently putting together the detail for the TDCs and have appointed Sarah Rowell, a high performance sport consultant to help develop the operating model.

We will continue to develop the pathway and the funding submission to SE to ensure we can deliver our overall mission of consistent junior world medals by 2020. 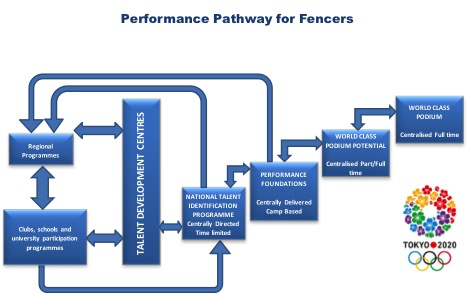