The 2022 Junior and Cadet European Championships began in Novi Sad, Serbia on Saturday, February 26th with Carolina Stutchbury clinching the European title in the age group above her own. 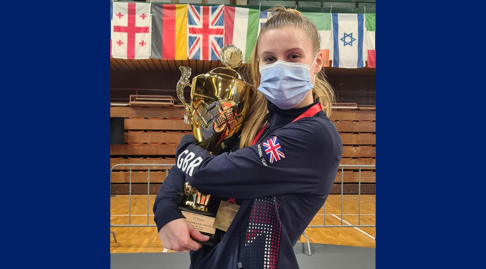 Ranked 35th for the event, she made light work of her first round poule, winning all five matches and conceding just eight hits. Ranked sixth for the knockout stages, Stutchbury earned a bye and, in her first elimination fight, beat Chiara Groess (AUT) 15-4. Continuing to forge a determined course through the tableau, she dispatched Teodora Sofran (ROU) 15-8, Antonina Lachman (POL) 15-11 and Esther Bonny (FRA) 15-7 to advance to the medal matches.

Stutchbury had faced her semi-final opponent, Lior Druck (ISR) in a tight battle earlier in the season during the team event in Zagreb. Harnessing this experience as well as recognising the strength of her Israeli opponent’s mental game, Stutchbury started positively, assuming the lead with well-timed long attacks, finishing in different lines. Using excellent distance with an active defence to draw her opponent onto her counterattacks and parries afforded Stutchbury a confidence-boosting 15-8 victory and the chance to contest the European title.

In the gold medal match, Stutchbury faced Irene Bernini (ITA). The final was a controlled affair throughout with both fencers trading hits to 9-9 before Stutchbury experienced a technical problem with her body-wire. Showing her trademark maturity, she used the break to start to exercise command of her opponent whilst staying active in defence. Gaining a small lead 12–10 against the Italian whilst keeping composure, Stutchbury executed her counterattacks, with body evasion and quick remises to win the championship title, with a 15-12 end score.

Speaking shortly after the final, Stutchbury said, “It’s super good to see all the work and effort that me and my coach Dmitri Romankov have put in over the last few months come to this. And I’m really happy to have won gold.”

Congratulations to Carolina on a brilliant result!

Please note the event mentioned in this report took place before the Board of BF’s February 28th statement about Ukraine.