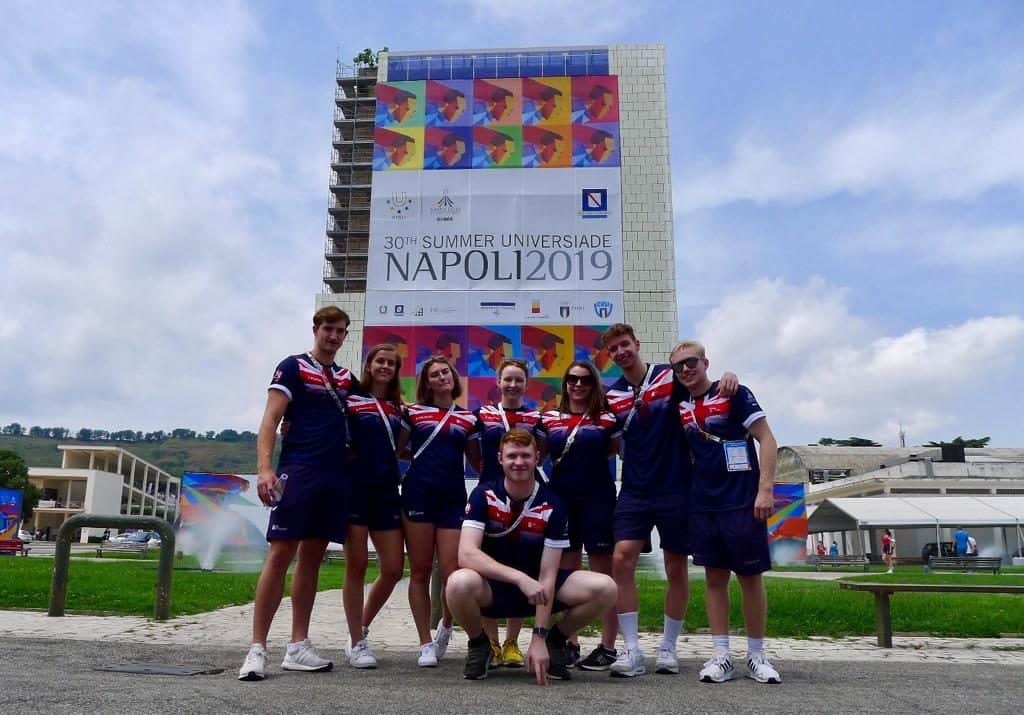 The Summer Universiade is the second largest summer multi-sport event in the world, beaten only by the Summer Olympics, taking place every two years. It is an unparalleled opportunity to compete on one of the largest sporting stages in the world. Previous winners of the Summer Universiade have included Inna Deriglazova (Women’s Foil, 2013), Olga Kharlan (Women’s Sabre, 2011 and 2013) and Yannick Borel (Men’s Epee, 2015). 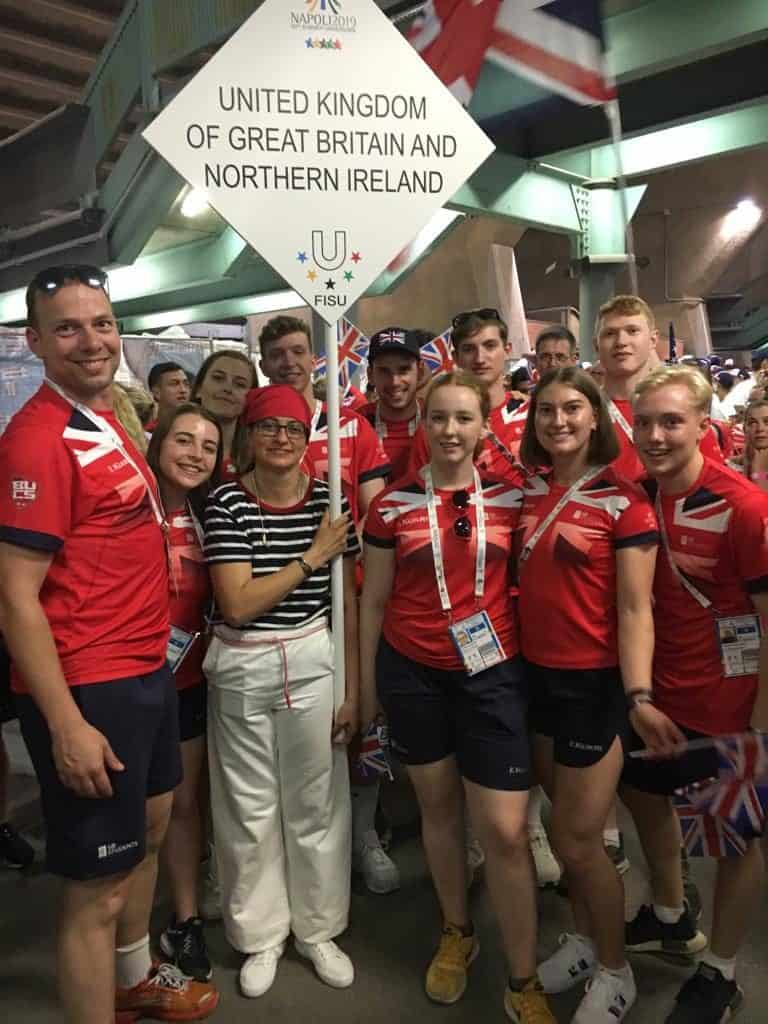 The 2019 competition began on 4th July with Women’s Epee and Men’s Sabre. In Women’s Epee, Danielle Lawson showed character in her poule, recovering from losing the first three matches to win the final two. In the last 64 she was drawn against Munn (SWE), going down 10-15, finishing 51st overall. The winner of the Women’s Epee event was Louis Marie (FRA). In the Men’s Sabre event, Both Deary and Hamilton showed confidence and variety to come through the poules with six victories and four victories respectively. In the last 64, Hamilton was drawn against Pysarenko (UKR), losing 6-15, finish 35th. Hamilton showed his loyalty to his team however, by getting back to be piste-side support for Deary.  Deary came out of the poules seeded second, had a bye through the top 64 and then faced Shimizu (JPN) in the last 32. Deary continued his strong form from the poules, defeating his opponent 15-4 to advance into the last 16. Here, he came across Pianfetti (FRA) whom he had defeated earlier in the day. Deary was unable to repeat his poule performance against Pianfetti, who came out strong from the start, losing out 10-15, finishing 9th overall. A strong performance in advance of the Senior World Championships taking place at the end of the month in Budapest, Hungary. The Men’s Sabre event was won by Oh (KOR), the senior world number 2.

Day two was Men’s Epee, with William East competing. He won two fights in his poule, unfortunately this was not enough to advance to the eliminations. His final position was 66th. However, after Alexander Lloyd was forced to withdraw from the Men’s Foil event with injury, East volunteered to step up into the Men’s Foil team, he would compete again in the Men’s Team Foil event. The Men’s Epee event was won by Rubes (CZE).

Day three represented the largest British interest, with five athletes competing in the Men’s Foil and Women’s Sabre events. De Almeida started strong, with three victories in the poules taking him through to the eliminations, Harry Bird joined him after winning two. In the 64, De Almeida faced Douglas (AUS) and despite going behind early, De Almeida clawed his way back to 10-10. However at this point Douglas pulled away to close out 10-15. De Almeida finishes up 43rd. Bird faced Nagano (JPN) and soon found himself trailing to the strong attacks of the Japanese fencer. However once he started to close the distance, not affording Nagano the space he needed to attack it became a closer contest, but Nagano was still able to close out, 10-15. Bird finished 47th. The Men’s Foil event was won by Rosatelli (ITA). 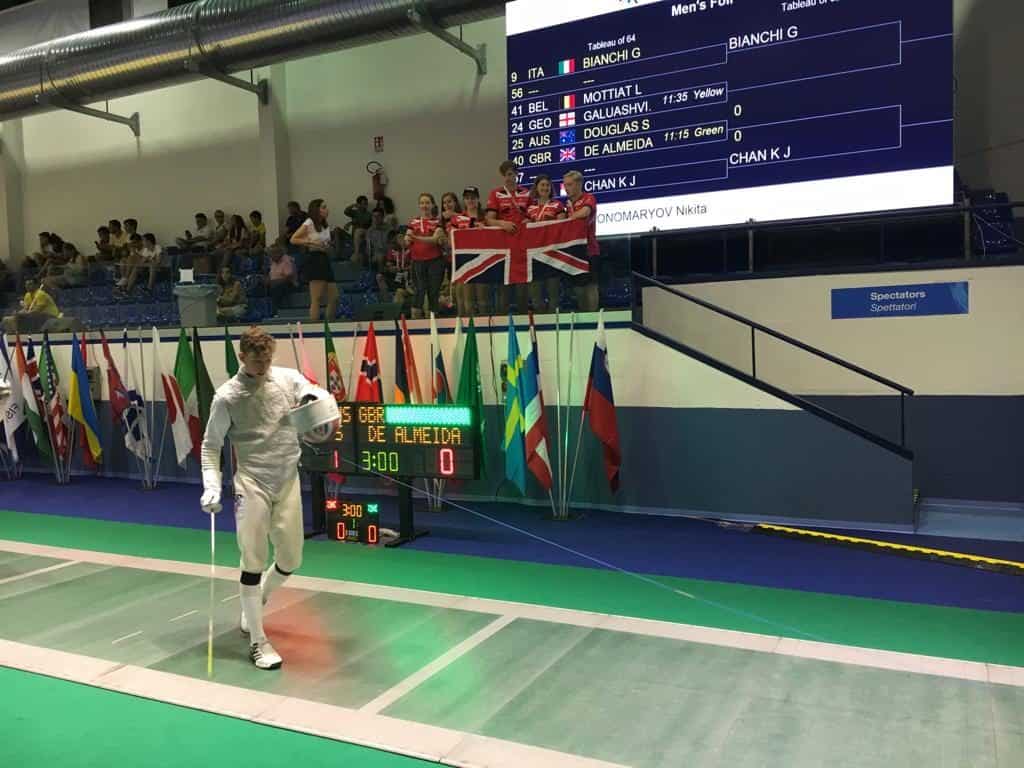 In the Women’s Sabre event Maria Chart won one match in her poule, and did not go through to the elimination round, finishing 45th. Kate Daykin and Caitlin Maxwell however both advanced with three victories and four victories respectively. In the last 64, Daykin faced Pokeaw (THA), but after an even start, the Thai fencer pulled away, and the final result is 9-15. Daykin finished 34th. Maxwell had a bye through to the last 32 where she faced Noutcha (FRA). Maxwell came through a thrilling encounter, supported by team and clubmate Chart at the side of the piste, winning 15-14 with a decisive parry-riposte. In the round of 16, Maxwell faced Kim (KOR), initially the fight was evenly balanced, however Kim pulled away and closed out 10-15. Maxwell’s final position was 10th. The Women’s Sabre event was won by Balzer (FRA).

Day four, the 7th July, was a rest day, which gave the whole team the opportunity to experience the unique atmosphere and experience of being at a large multisport event. The team took the opportunity to be spectators for the judo, synchronised diving and shooting events, they were particularly struck by the mental focus and discipline required in the shooting, especially as the event’s atmosphere builds towards the finals.

The competition restarted on the 9th July, after a training preparation day on the 8th July, with Men’s Team Foil and Women’s Team Sabre. The Men’s Team Foil were up first against second seeds Japan. The Japanese team proved too strong for the team of Bird, De Almeida and East, coming through 24-45. The team finished 15th. The competition was won by Italy. In the Women’s Team Sabre, Great Britain faced a strong Mexican team in the last 16. Mexico pulled out an early lead and the match appeared to be heading towards a Mexican victory, before Maria Chart stepped up in the 8th leg, an immense performance, 12-5, turned the score from 27-35 to 39-40. This gave Maxwell just the opening she needed, she picked up the momentum from Chart and closed the fight out 45-43. In the quarter-finals, the British team faced home team, Italy. In the 6th leg, Maxwell gave Britain a slender lead with an impressive 11-3 turnaround against Lucarini, the individual silver medallist. Unfortunately Italy wrestled back momentum in the final three legs, and the final score ended as 34-45. The British team finished 6th. The competition was won by Italy. 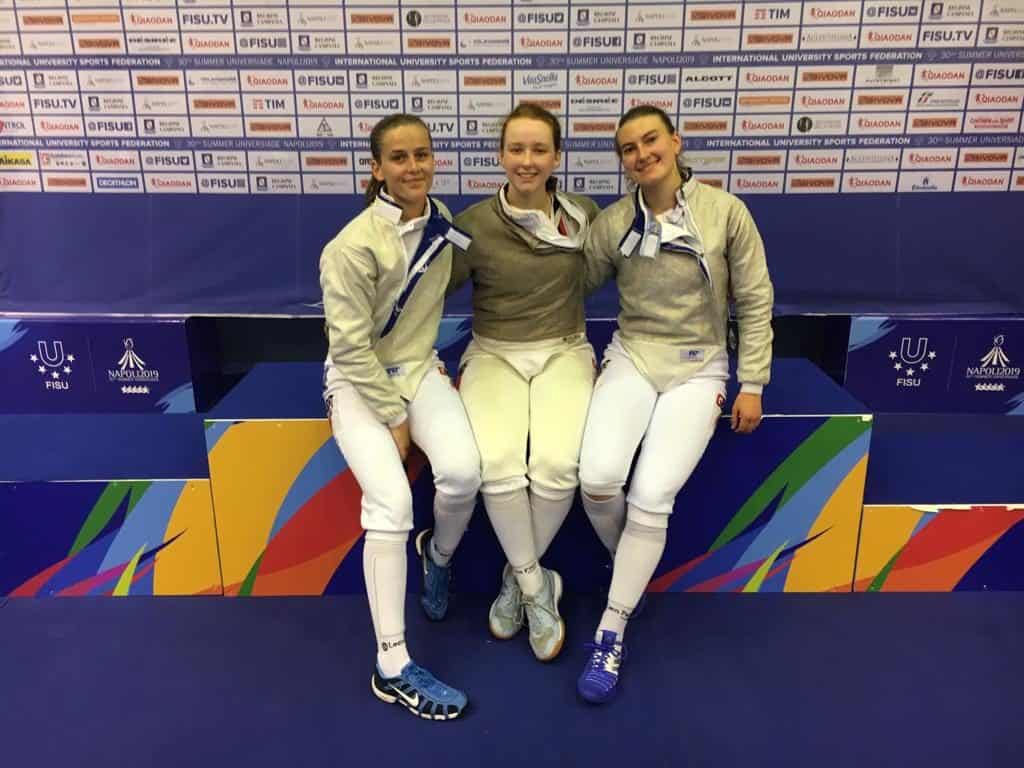 At the end of the competition, the team was invited to the main athlete village in Napoli for a reception with the British consul. This represented the close of the 30th Universiade for British fencers. The 2021 Summer Universiade will take place in Chengdu, China. 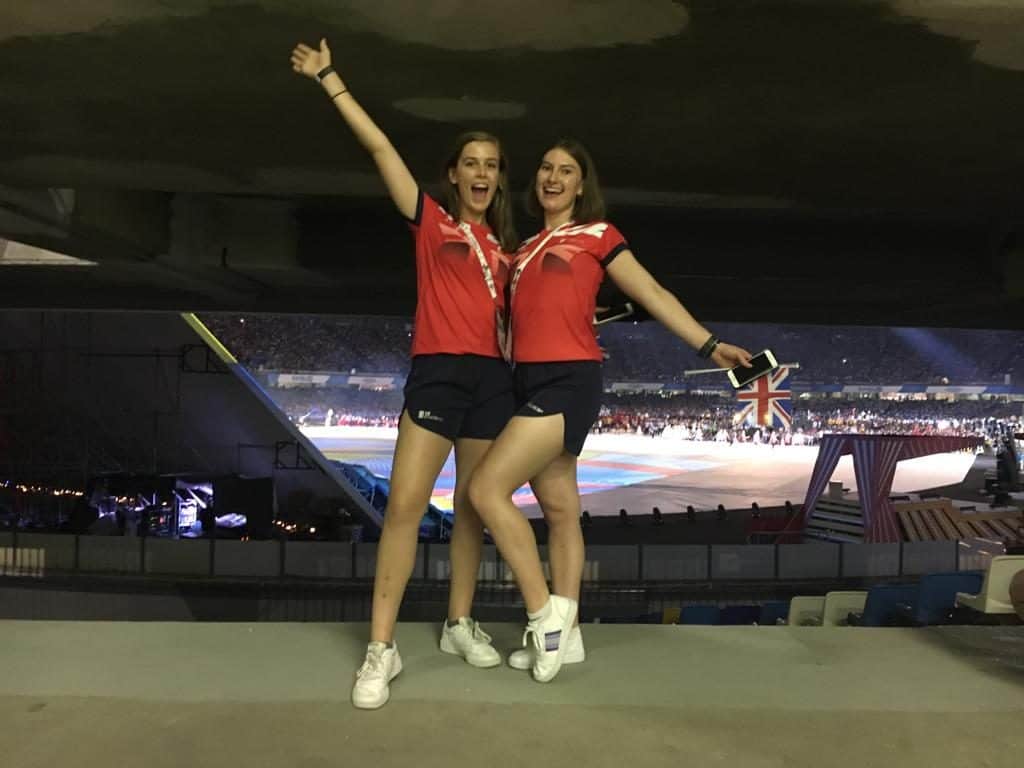