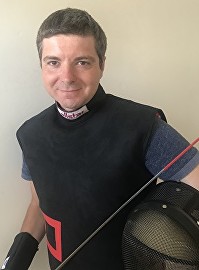 My Coaching Philosophy
John has over 15 years experience of coaching primary and secondary school age childen. In 2009, he was sent by British Fencing to train in Bucharest Romania to qualify for his FIE international coaching diploma. There, he was trained by three times Olympian Petru Kuki and the 1995 world foil champion Dmitri Chevtchenko. The programme consisted of a minimum of thirty hours training per week amounting to over two hundred and forty hours of coaching education in total. Upon returning to Britain, England Fencing awarded him his level five foil coaching award.

He also ran the foil coaching ‘master class’, at Loughborough University in 2010 at the British and England fencing coaches conference.

He holds a current DBS certificate, has been trained and certified in First Aid and attended 'Safeguarding and Protecting Children' workshops.

John's ethos is to aid the empowerment and development of young people through sport.