Creating a culture of coaching at Royal Holloway University 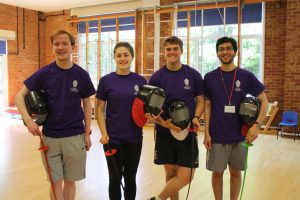 Back in 2017, Royal Holloway Fencing Club had some 50 fencers, training in three different weapons with only one coach. To improve the quality of training, 12 students took the British Fencing L1 coaching award in January 2018. This was the start of a culture of coaching at Royal Holloway. Since then, they have been very active, delivering taster sessions for 8-11-year olds at their primary schools to running sessions at sports days organised by the university so primary school children can try new sports. We have spread the sport by running drop-in taster sessions at University open days and ran a fencing course at a local primary school.

At the school, we have been running weekly hour-long sessions throughout their second and third terms. We ran a programme based on the British Fencing GO/FENCE, with a dozen children new to fencing. This gave the children a chance to try out a new sport with an emphasis on fun and develop movement skills. Many of the ‘less sporty’ kids really took to fencing. They were all unfamiliar with the movements, which put them all on a level playing field.

As the program progressed, we saw a development in the young participants. They were moving and fencing much more confidently, were being more respectful to each other. They began to care less about winning at all costs and more about personal development. After 10 weeks all the children were able to pass their GO/FENCE Bronze Award.

Being given the opportunity to get qualified has given our members opportunities they wouldn’t have otherwise. Now our members are now coaching both professionally and voluntarily at clubs and camps at home and abroad. One coach is about to spend his second year in a row coaching at an American summer camp. He says that ‘the coaching awards and the experience I have gained have given me the confidence to take my coaching further afield’. We held first aid and safeguarding courses with help from British Fencing and UKCoaching, enabling them to join British Fencing’s professional coaches register.

The effect of such a large number of coaches and coaching opportunities has been beneficial to the club as well. It’s common to see fencers giving each other lessons at training; discussing fencing, giving match advice and extra 1:1 lessons outside of training. One coach said that it has given her a new-found respect for coaches and teachers. In 2018 we held a level 1 course and in 2019 held a level 2. In 2020 we aim to hold level 1, 2 and 3 courses to ensure the high level of coaching remains for the next intake of students, and ensure Royal Holloway has a culture of coaching for years to come.