In memory of the late David Kirby, we remember his life and fencing career, as told by his friends and family. 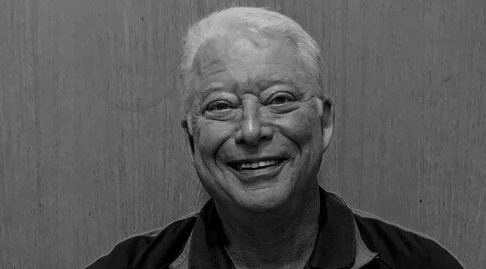 There are very few people who have had more influence on the world of fencing in this country than David Kirby – not bad for someone who didn’t really fence!

The 70-year-old former army Major is credited with introducing thousands of youngsters to the sport over four decades of coaching – helping many to domestic and international glory – including Olympian Louise Bond Williams. He is also regarded as a trail blazer for modern day coaching, sabre and woman in sport.

When he died in January 2021, after contracting covid in hospital following treatment for an existing health problem, he was still Head of Coach Development at his beloved Shakepeare’s Swords…the renowned sabre club he founded in the 1990’s.

But sport was never really part of the initial script. David was born in Westminster in 1950 to actor Max Kirby and wife Aurea. He attended Milton Abbey School in Dorset, and although fencing was offered and he dabbled in riding and shooting, it was wild flowers and photography that captured his imagination.

Indeed, it was only towards the end of his 20 year army career that fencing came into focus.

David had joined the Royal Green Jackets from school as a Private and managed to get into Sandhurst at the second attempt in 1970. He became an officer in the Royal Engineers, and it was during this time he met his wife Marguerite, on a blind date for the Christmas Ball.

Postings across the UK and Europe followed – including Germany and Northern Ireland.

It was whilst commanding a company at the Army Apprentices College in Chepstow in 1984 he was charged with heading up the fencing club….as well as the College band, which he conducted whilst playing the flute! Although foil was the dominant weapon, David believed that sabre was most suited to engage young people, so set about teaching himself to coach this.

It was this experience that led him to offer his services to King Edward’s School in Stratford upon Avon (K.E.S) – Shakespeare’s school – during his final army posting to Warwickshire in 1987. The K.E.S boys did not know what had hit them with the arrival of this charismatic army Major.

Old Edwardian Adrain Bedford said: “The first thing he did was introduce the basic army warm up. By the end of a term, I’m not sure we were any good at fencing, but we were very fit! He taught us to climb ropes without using our legs or feet whilst regaling us with stories of how many mortar bombs you could put into the air at the same time. This last tale increased in number with each telling.

“As well as physical training David also looked to enhance our psychological edge, though the phrase I remember is ‘it’s a case of mind over matter: I don’t mind, and you don’t matter. Get on with Bedford!’ “

“Arming fifty plus teenage boys with swords to hit and stab each other required a firm hand and his military background certainly came in useful,” he said, “I think he enjoyed dusting off his old parade ground voice to keep us all in check.”

At this time K.E.S. was still an all boys school with rugby the dominant sport. But fencing started to gain traction with new entrants eager to try something a bit different. David started to see there might be potential for greater things. Always an advocate for shared expertise and resources he worked with other clubs – including packing the school minibus with fencers each Thursday night to drive them to London to train.

The efforts started to pay off. Soon the entire U16 & U18 boy’s England sabre teams came from K.E.S. Demand for fencing increased and the seeds of Shakespeare Swords were sown. Over the years it has become one of the foremost sabre clubs in the country, fostering a clutch of national and international champions.

By this time David had left the army and started work for Peat Marwick as a management consultant. But after a couple of years the draw of fencing proved too great and he left to set up his own business to enable him to coach more. Eventually, that too went as his desire and passion for coaching became all consuming. He read and researched endlessly to hone his craft, even moving to Budapest for a spell to study the Hungarian methods.

His belief that collaboration and expertise borrowed from outside hardened. He did something not seen in fencing before when he brought in S&C expert Paul Claridge and sports psychologist Jonathan Katz.

Mr Katz said: “David placed the coach-athlete relationship at the centre of his coaching. He also brought an organisational and systems lens to how he understood coaching by recognising the importance of the demands of the wider performance environment and the range of sport science disciplines needed to appropriately meet these demands. “

At the same time he became a huge advocate of women’s fencing. When he started competitive women’s sabre did not really exist. There were very few domestic competitions so they had to pitch in with the men at mixed events. There were no world cups or world championships.

By 1996 he was training female athletes for the few competitions that there were – the Coup du Nord in Europe and NAC in America. David’s hard work paid off, when in 1998 women’s sabre was included as a demonstration event in the Senior World Championships. Louise Bond Williams, his first female fencer, won bronze. She of course famously went on to represent Great Britain at the 2008 Athens Olympics and again at London 2012.

By 1999 women’s world cup sabre competitions arrived, as did senior, junior and cadet world championships proper. All the British teams were dominated by David’s fencers, and he became the British women’s junior sabre coach.

Louise Bond Wiliams said: “He nurtured a real team spirit. He encouraged training camps with everyone involved and worked hard at getting competing clubs to work together. He was a positive influence for everyone on the team, regardless of which club they came from, or whether he was their individual coach or not.”

In 2003 David decided it was time for a new challenge and became Head Coach at Eton College. It did not take him long to increase the fencing cohort from 15 to over 100. Eton quickly became a formidable force within school and national fencing.

Old Etonian Harry Boteler, who went on to represent Great Britain at the Cadet European and World Championships and then fence internationally at senior level said: “Not since the days of six time Olympian Bill Hoskyns has the Eton salle seen anything like it.”

In 2005 David became Head Coach at Birmingham University Fencing Club. Over the next four years he applied his skills and knowledge which resulted in multiple individual and team BUSA/BUCS medals and representation at GB Senior, U23, U20 and student levels.

Sam and Hannah Stockley remember the time fondly. “The Birmingham University motto may be ‘Per Ardua Ad Alta’, said Sam, “but thanks to David ‘ If your pee is golden, your medal won’t be ’ will be far longer remembered!”

In 2007 David returned to Shakespeare’s Swords to start the next stage of his fencing journey – training the next generation of coaches. He took a young fencer Dan Redshaw under his wings and trained him up to eventually take over as Head Coach.

“He helped me to develop as a fencer, a coach, a coach developer and as a man, said Mr Redshaw. “Whatever positive impact I have had on the lives and fencing careers of those I have trained it is as a direct result of David’s input. He is the person who has had the greatest influence on my life, and I am certain that I would not be the man I am today without him.”

At the same time David was heading up the fencing programme at Filton College in Bristol.

In a radical move he ensured every single student qualified as a coach alongside what they were there to do.

Callum Wilson commented: “Taking ten teenagers, all living away from home for the first time and ensuring they are all safe, healthy and happy is no mean feat, but it was a task David took to with aplomb. From advice on budgeting to mechanics, manners and language, David taught so much more than just how to do a great parry!”

Back in Stratford he developed coaching courses that attracted a string of eager prodigies, whilst still continuing his own lifelong learning crusade by doing a PhD at Birmingham University. His thesis, From Piste to Podium was published in 2015.

Alongside all of this, he managed a spell at The Sydney Sabre Centre and, in a nod to his roots, the Royal Shakespeare Company. He took on the role of teaching star of stage and screen Jonathan Slinger fencing for his memorable performance as Hamlet at the Royal Shakespeare Theatre in Stratford in 2013 – set in a fencing gym.

Chris Buxton, Head Coach at Shakespeare’s Swords said: “What David contributed to the world of UK fencing over the years is simply unprecedented. This, along with the direct positive impact he had on thousands of young lives, will be his legacy.”

Something the person who knew him best, Marguerite, his wife for half a century agrees with. “ What gave David most satisfaction and pride was to see a young person develop from, sometimes a rather shy and awkward teenager, into a successful happy individual,” she said.

“He felt the skill of coaching, or competing would give young people a confidence when they left home and an entry into a community.”

She added: “One of his strengths was always ‘find a way’. He got tennis elbow, so he learnt how to use his left arm. The RNIB asked him to teach blind children to fence, impossible you might say, but he found a way.

“And then there was the time this former army major – known for his efficiency and despise of carelessness – found himself at the airport with a young group of fencers travelling to Hungary without one passport – his own! He simply got on the phone and sheepishly asked me to drive it to Heathrow!”

David’s funeral took place in February 2021 and a memorial service will take place in due course.

He leaves three children – Philippa, Susy and Peter (who himself became an accomplished fencer at cadet and junior level competing internationally) – and five grandchildren.

This piece was contributed by David’s friends and family.