The 2019 Senior World Championships in Budapest, Hungary took place 15 – 23 July.  Here is a round up of all the action including updates on British results.  There were three days of preliminary rounds before the six medal days.

Two British fencers lined up in a field of 189 entries in the first event at the Championships.  Susan Sica won all of her five first round fights, earning a bye through to the round of 64.  Katrina Smith Taylor (V4D2) qualified for the preliminary elimination stages where she beat Andersen (AUS) 15-11 before losing 15-7 to Hoppe Montanaro (CAN).  In the round of 64 Sica beat Gonzalez Sandoval (CUB) 15-10 but then narrowly lost 15-13 to Russia’s double European Champion, Kolobova.

The 160 entries in this event included four from Great Britain.  Will Deary (V5D1) did enough in the first round to earn a bye directly through to the round of 64.  James Honeybone (V5D1), Curtis Miller (V3D3) and Jonathan Webb (V2D4) all qualified through the poule stages.  Honeybone earned a bye through the first preliminary elimination phase as Miller beat Mandov (BUL) 15-9 and Webb saw off Shimamura (JPN) 15-12.  Miller went on to beat Tokunan (JPN) 15-12 to join Deary in the round of 64 but Honeybone lost 15-14 to Choy (SGP) and Streets (JPN) beat Webb 15-7.

In the round of 64 Deary beat Teodosiu (ROU) 15-13 but Miller lost out 15-7 to Italy’s number one fencer Curatoli.  Deary went on to face the World number one and Pan-American Champion, Dershwitz (USA) but lost 15-13.

Kate Beardmore was Britain’s only entry amongst a field of 143 entries in this event and she won five of her six first round matches, progressing directly to the round of 64.  She faced home favourite Mohamed and despite a great match lost 15-12.

This event saw the largest field of all the individual tournaments with 224 entries including two from Great Britain.  Both Elliott Grover and Phillip Marsh won three from six first round matches, earning byes through the first of a three-stage preliminary knockout.  Marsh went on to beat Dikov (BUL) 15-13 and Patterson (CUB) 15-7 to make the round of 64.  Grover went out 15-11 to Gunput (MRI).  In the round of 64 Korea’s reigning Olympic Champion Park S. of Korea beat Marsh 15-10.

Hungary’s Gergely Siklosi delighted the home crowd by taking the title, beating Sergey Bida of Russia 15-14 in the final as Igor Reizlin (UKR) and Andrea Santarelli (ITA) settled for the bronze medals.

The field of 146 entries in this event included four from Great Britain.  Maria Chart (V4D2), Caitlin Maxwell (V4D2), Aliya Itzkowitz (V3D3) and Kate Daykin (V2D4) all qualified through the poules stages.  Chart and Maxwell benefited from byes through the first preliminary elimination fights and were joined in the second by Itzkowitz who beat Srinuald (THA) 15-10.  Daykin, though, lost 15-4 to Voronina (UKR).  Only Maxwell was able to make it through to the round of 64 by beating Rodriguez (VEN) 15-11 as Benitez Romero (VEN) beat Chart 15-10 and Yoon (KOR) defeated Itzkowitz by the same score in the last preliminary knockout.  Maxwell faced Navarro (ESP) in the 64 losing 15-8.

Great Britain were represented by four fencers in the field of 187 entries in this event.  Richard Kruse, by virtue of his World ranking qualified directly to the round of 64.  James-Andrew Davis joined him with six straight wins in the poules.  Ben Peggs (V5D1) and Marcus Mepstead (V2D3) qualified for the preliminary knockout stages with Peggs earning a bye through the first fight before going on to beat Ou (TPE) 15-13 to make the 64.  Mepstead made it four from four, through to the second day with victories over Kontochristopoulos (GRE) 15-11 and Serri (SVK) 15-10.

Great Britain did not feature in the field of 35 teams in this event.  China took the gold medal by beating Russia 29-28 in the final.  Italy beat Ukraine 45-36 to secure the bronze.

Deary, Honeybone, Miller and Webb formed the British team in this event amongst a field of 32 teams.  They beat Colombia 45-36 in the round of 32 before losing 45-21 to Korea.  In the placings matches they first lost to the USA 45-40 before beating Canada 45-32 and then losing 45-17 to Ukraine to finish 14th.

Korea took the title by beating Hungary 45-44 in the final as Italy defeated Germany 45-38 in the third place play-off.

The 29 teams in this event did not include Great Britain.  Russia became champions of the World with a 43-42 gold medal victory against Italy.  Last year’s champions had to settle for the bronze medal, beating France 45-43 in the play-off match.

Great Britain did not feature in the 42 team line-up for this event which was won by France.  They beat Ukraine 45-37 in the final as Switzerland defeated China 45-35 in the bronze medal match.

Chart, Daykin, Itzkowitz & Maxwell made up the British team competing in this event in a field of 31.  They lost 45-38 to Azerbaijan in the round of 32 to place 18th.

Great Britain lined up with Davis, Kruse, Mepstead & Peggs amongst a field of 35 teams.  A bye through the 64 was followed by a 45-34 victory over Belgium.  Korea then beat Great Britain 45-41 forcing the team into the placings matches where they beat Ukraine 45-34 and Egypt 45-35 before losing 45-41 to Japan, finishing 10th.

The USA claimed their first men’s team foil World title by beating France 45-32 in the gold medal match as Italy beat Russia by the same score to claim the bronze medal. 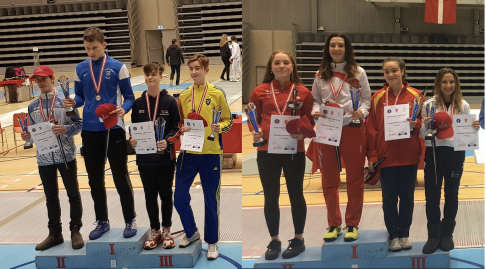 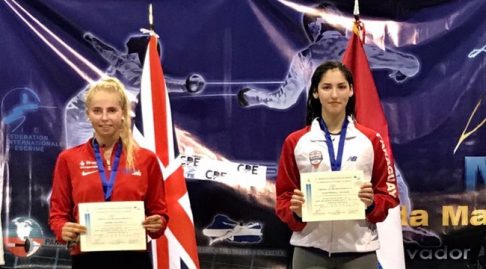 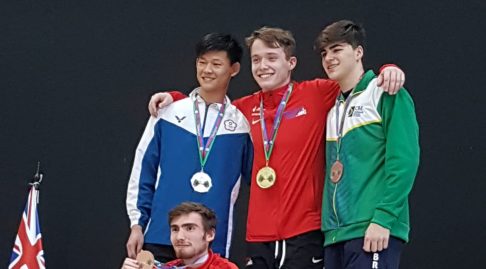 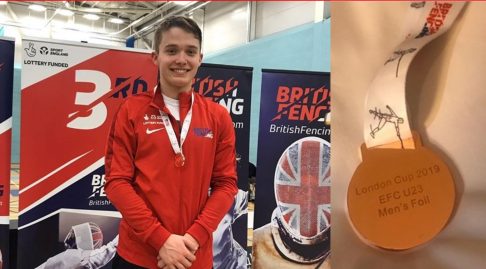 BRONZE FOR EVANS AT 2019 LONDON CUP